Galt High School has a long and proud history of serving students in the community of Galt since 1911. It has served students across a large geographic area spread from Sacramento and San Joaquin Counties from Elk Grove to the north to Lodi to the South and from the Staten Island and Walnut Grove delta to the west to the Amador County line to the east. Galt High School had the distinction of being the sole comprehensive high school in the Galt Joint Union High School District until the fall of 2009 when, Liberty Ranch High School opened its doors to students.

The following information was used with permission from the Galt Historical Society website at https://www.galthistory.com/history 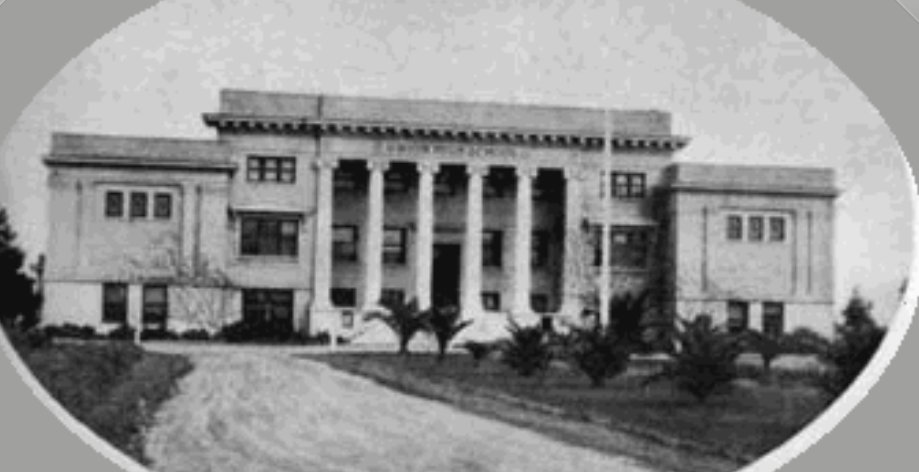 This is Galt's first official high school, built in 1913

Did you know that the Galt High School where our young people go today is the fourth Galt High School in our community? Well here is a brief "Galt High School History" for your information: Dr. Montague and J. W. Reese combined efforts to form a high school district, and on October 20, 1911, voters in ten small elementary districts went to the polls for the crucial vote. The work of the two organizers was successful. The measure to establish the Galt High School District carried overwhelmingly with 141 yes votes as opposed to 40 no Votes. Thus was Galt High School born.

At the corner of Oak Avenue and A Street stood a two-story house that was to be the first high school building. C. McKenzie was the owner. A faculty of three met the first students. Mr. Reese was the principal and also taught classes. Mr. William Bland, who was to become the Principal later, taught mathematics, bookkeeping, and music. Miss McFarland taught English, Latin, and composition. This first school offered two courses of study. It was a two-year course in business, and the other, a four-year academic course. All students were enrolled in music. Students who did not have musical instruments took vocal lessons. There was a student government, and either Paul Larrick or John Campbell was student body president.

There were few social events those first few years because of the lack of transportation. Most of the rural students rode horses to school, although a few students did have cars. Most of the roads were not paved. There was a play presented in the Odd Fellows Hall and a parade which took place just before graduation. In the first two years of its history, Galt High had only one graduate. Katherine Reynolds graduated in 1913.

Galt High School moved to the present site with a new building in 1913. The new quarters were built with the issuance of bonds of 30,000 dollars. This represented about a third of the cost. The second Galt High School was an imposing two-story brick structure. Greek Columns supported the entrance, and an expanse of lawn and a driveway lined with palms offered a pleasing entry to visitors and students alike. Twenty-two students were present on the first day of school. The faculty had grown by one. Miranda Arms had joined Mr. Reese, Mr. Bland, and Miss McFarland. In June of 1924, a mysterious fire destroyed the building. Charred ruins were all that remained.

The District recovered from the shattering blow of the fire that destroyed the existing building in 1924. School opened in September of that year in temporary buildings that were to be home to students for the next three years. The students referred to these temporary quarters as the "Chicken Coops".

Planning started on a new building. Dean & Dean of Sacramento were the architects. Out of their plans came a two-story mission-style schoolhouse. The corner stone laying ceremony took place on March 12, 1927. A parade from 4th and B Streets led the way to the site. Galt Masonic Lodge No.257 conducted the rites with George Jones, Grand Master of California, and Fletcher Cutler, Grand Orator in charge. Scout master J.L. Orvis and Boy Scouts of Troop 1 supervised the parade.

The third Galt High School was completed in 1927 and was dedicated February 8, 1928. The building, designed for 300 students, was constructed so additions could be made. The main building was not enlarged, but outlying buildings took care of the growing student body. The auditorium seated 600 and was well equipped at the time it was built. The cafeteria seated 150.

In 1928, the Principal Mr. Rutherford, instituted a Junior College of Aeronautical Engineering. The campus had a pilot school. There were hangers for the airplanes that were on loan from March Field, a pilot's license could be obtained by those who were enlisted in the program. Fifty-three men graduated from the program. The concept was unusual, and Galt High School was acclaimed for its unusual curriculum. Lack of finances caused the program to be closed in 1930.

Every student walked the halls and climbed the stairs in the building. They may not have been in every classroom but these two things were common to all. In addition, almost everyone "found" the library, at least some of the time. The cafeteria was familiar to all. Each year another framed picture of the last year's class hung along the corridor. Trophies were added in the trophy case, and a second trophy case became evident in the hall. When classes broke, a pushing, jostling throng jammed the corridors and stairs, going somewhere, or anywhere, in a hurry. In all the rush, surprisingly, very few fell down the stairs. Near misses, yes, but few injuries. This building became known as the "Grand Old Lady".

Outwardly the brick building appeared the same as it was in 1927, mellowed by time and the trees and shrubs surrounding it. The inside, though, has gone through countless changes. The first floor was remodeled to fit the needs of the school until one was hard put to remember how it was in the beginning. When the building first opened, there was a drama room which had a small stage facing into the classroom. The library was next to it and also served as a study hall. The other rooms along the hall were given over to classes in business subjects. Upstairs was the chemistry lab, occupying room 26. At the back of the auditorium, where drama and drafting classes eventually moved, was the homemaking department. As the student body grew the cafeteria became the library. The "Office" grew to several, and those in turn were done and re-done. The 'Teachers' Room" migrated quite a bit, from 1 to 7 to 15 to 3.